This tour offers you a visit to some of the most beautiful beaches on the southern part of Bali. There are also watersport and marine activities that you can join during this trip. At the end of the trip, you will be taken to the famous Uluwatu temple to watch stunning sunset and kecak fire dance performance.

We start the tour in the morning by visiting Kedonganan fish market. At the time we arrive there, you will see lots of boats on the coastal area and the fishermen who had just come from sailing. Here you can buy all kinds of fish in much more cheaper price than at seafood restaurant in Jimbaran. Not only because of the cheap price but also the quality of the fish.

The fish here are in good condition and quality since they are fresh; the fishermen fished them in the evening.

There are a lot of fish varieties available in Kedonganan fish market, such as prawns, lobsters, squids, scallops, octopus, crabs, and various species of marine fish from Bali’s sea in any sizes. You can buy all those fresh fishes in relatively cheap price (of course you can also do bargaining).

If you buy some fish at the market, you can also grill the fish directly at the stalls around the market. It’s relatively cheap to grill the fish at the stall, they will charges around Rp. 10,000/kg. Talking about the taste & flavor, you won’t be disappointed; the stall will offer you delicious grilled seafood with natural Bali spices which is not less tasty as seafood at restaurant in Jimbaran bay. After finish with the grill, you can directly enjoy it in the stall. Every stall provides seating and table, they also provides rice and a variety of soft drinks. Vegetables, fruits, and spices seller are also available around the market. Do not forget to bring your own wet tissue or hand sanitizer, since you will eat by hands, no spoon available, and not all stalls provide tissues. 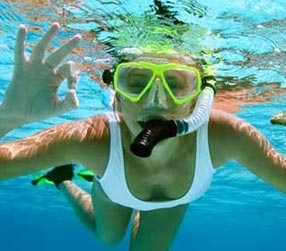 Next destination is Tanjung Benoa. If you are very keen on watersport and marine activities, this is the right place for you. Many facilities are offered, some of them may spur your adrenaline (jet skiing, banana boat, parasailing etc.). All water sport offered here is very safe to be tried both for children and adults.

Concealed behind high cliffs and overgrown shrubbery, Pandawa beach had long remained secluded from the crowds of tourists, due to the less-than-easy path that had to be taken to access it. Often referred to as the Secret Beach, Pandawa is more beautiful than Kuta or Dreamland but it is not as famous as those two yet.

Seeing the potential held in the beach’s majestic and pristine beauty, the government has opened about 1.5 kilometers of access roads. This beautiful road to a hidden paradise is indeed one of a kind, cut between rugged limestone cliffs that rise on either side. As you near Pandawa, you will be greeted by five statues carved into the cliffs beside you: Yudhistira, Bima, Arjuna, Nakula and Sahadewa. These are the Panca Pandawa, five brothers who are characters in the Mahabharata epic story, from which the beach takes its name.

Once you get to the beach, its spellbinding beauty is unquestionable. Seemingly endless stretches of pure white sand span from one end to another. The clear blue water heaves with the swell of the ocean in hypnotic rolling waves, until the sea meets the sky. The magnificent cliffs that once served as the walls that hid the secret beach now stand guard, keeping watch over all who enter. You can take a swim and enjoy the other available water sports such as canoeing and paragliding. Don’t feel like going in the water? Simply sit on the beach beneath the trees or at one of the beach stalls and enjoy a fresh coconut with a snack of roasted corn.

Aside from the usual beach activities, Pandawa Beach is also the site for the Hindu “Melasti” ceremony practiced by the Balinese community. Melasti is held each year around March, in conjunction with Nyepi, the Hindu Balinese New year. The ceremony takes place a few days before Nyepi and represents the cleansing and purification of mind and soul. This is a rather spectacular parade and worthy experience, should you be visiting Bali at the right time of year.

Next beach to visit is Padang padang, a famous surf point in Bali with the great waves and white sandy beach. If you are experience or pro-surfer, Padang – Padang Beach is the right place for you to enjoy the surf adventures during your holidays in the paradise island of Bali. The high waves have made the surfers demands against this surf spots and the exotic scenery of surrounding area are completing this place as a perfect place to visit.

Last stop of the day is visiting the Uluwatu temple which is perched on a steep cliff 70 metres above sea level overlooking the Indian ocean. You will admire the panoramic view of Uluwatu Temple as well as it's spectacular sunset view. The temple was built in the 11th century, it is one of nine directional temples meant to protect Bali from evil spirits.

At the other side of the temple, there is also a famous 'Kecak' fire dance performance which is regularly performed with sunset as the backdrop. On the way back to your hotel, you can optionally arrange a seafood dinner in Jimbaran bay or Seminyak.

The pricing for this tour is NOT per person but per car so you probably pay less if you have more people in your group. (maximum 6-7 persons per car). For larger group, please contact us.

Included in this tour: